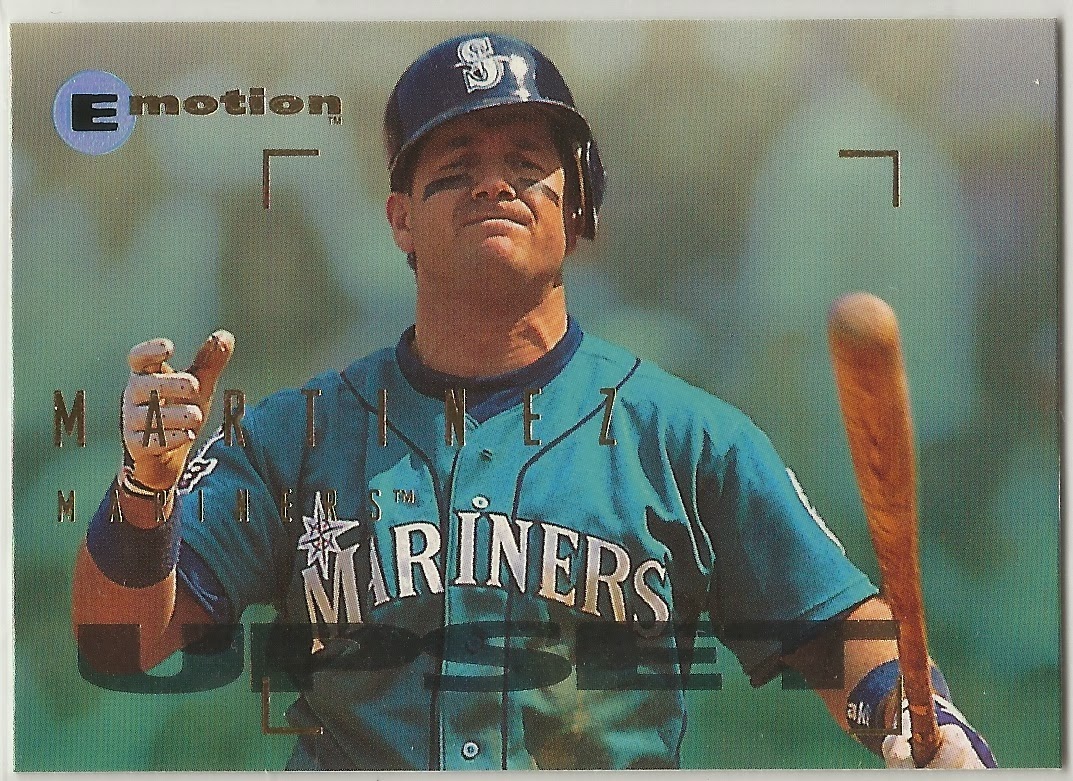 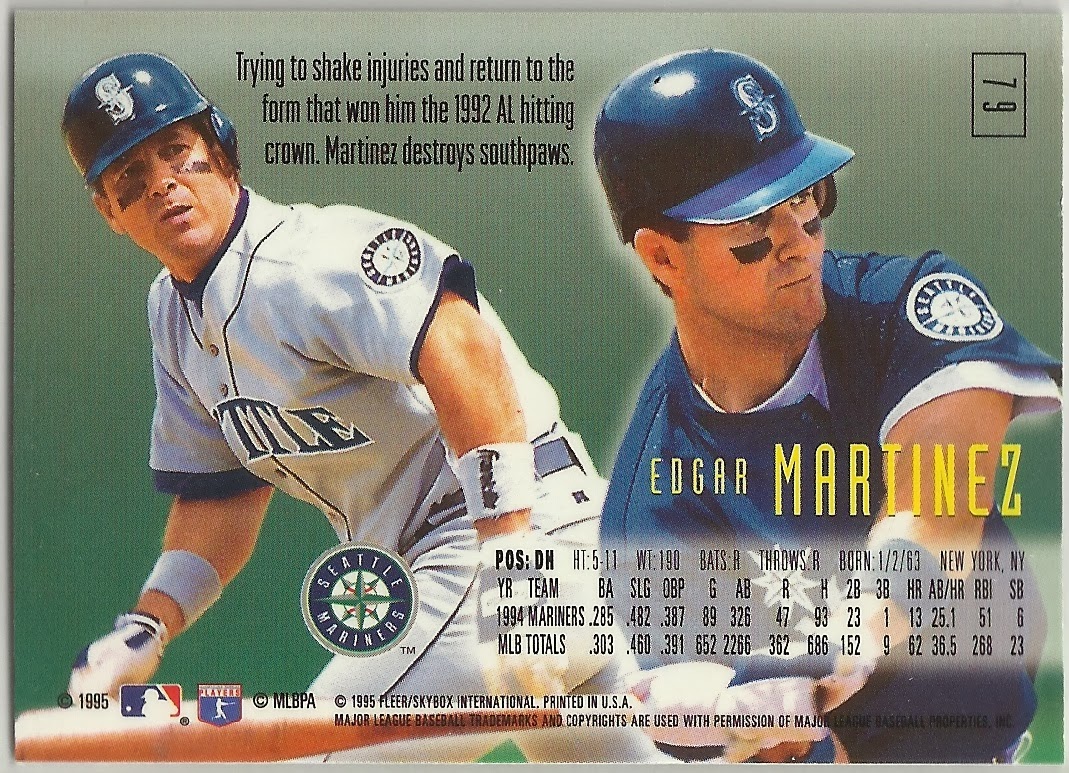 UPSET : verb \(ˌ)əp-ˈset\
: to make (someone) unhappy, worried, etc.
: to cause an unpleasant feeling in (your stomach)
: to cause (something) to be unable to continue in the expected way

Based on the photo on the front of the card, I think Edward is:
: unhappy
: and has an upset stomach
: because he just popped out.

Edgar Martinez IS the Designated Hitter.

Played all 18 years of his career with the Mariners (plus 8 seasons in their farm system). 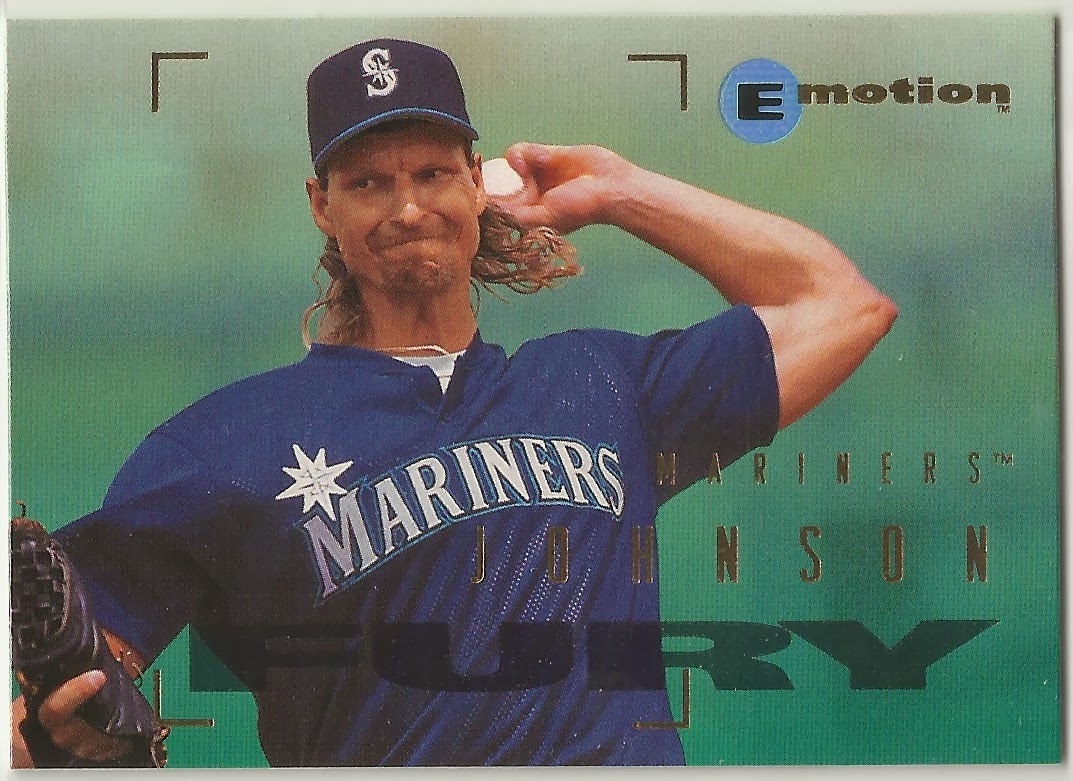 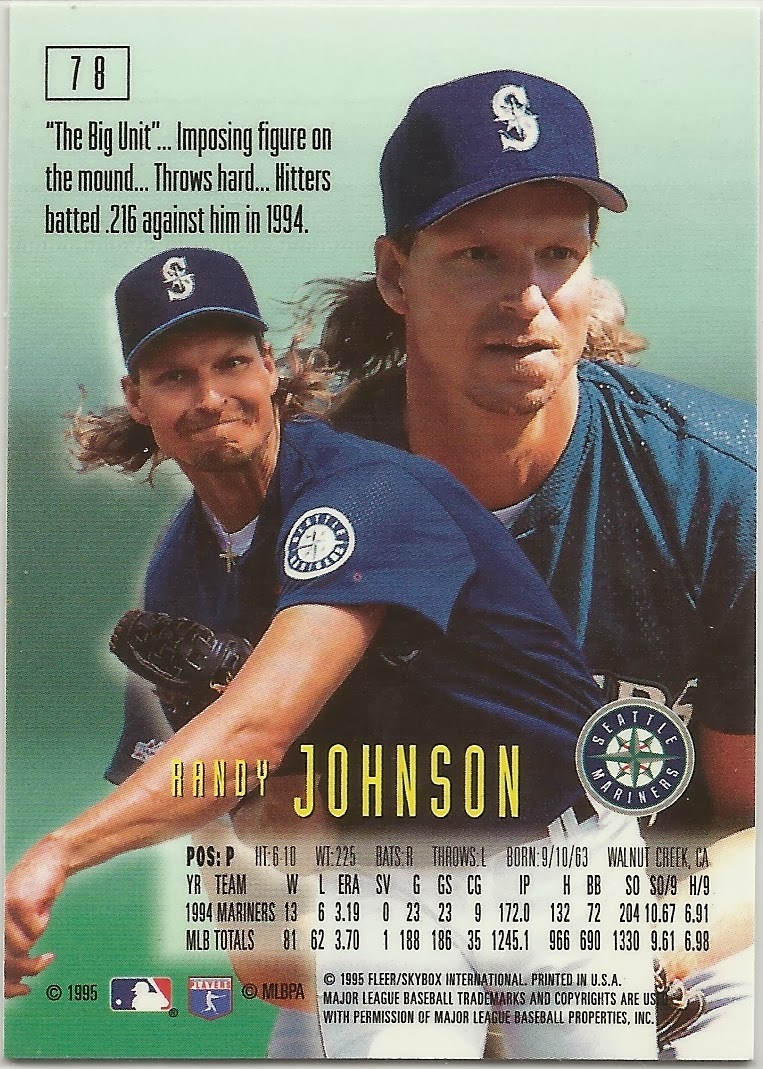 ...and armed with a baseball.
That's more like the Randy Johnson I know.

Posted by The Angels In Order at 4:37 PM No comments: 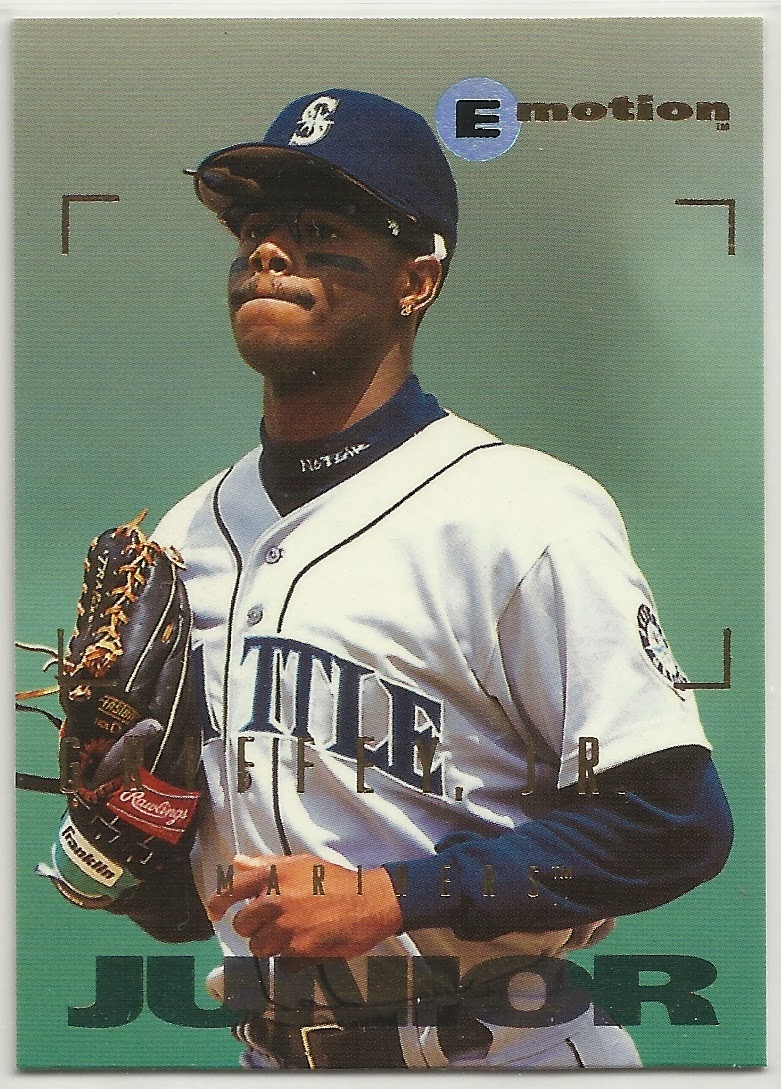 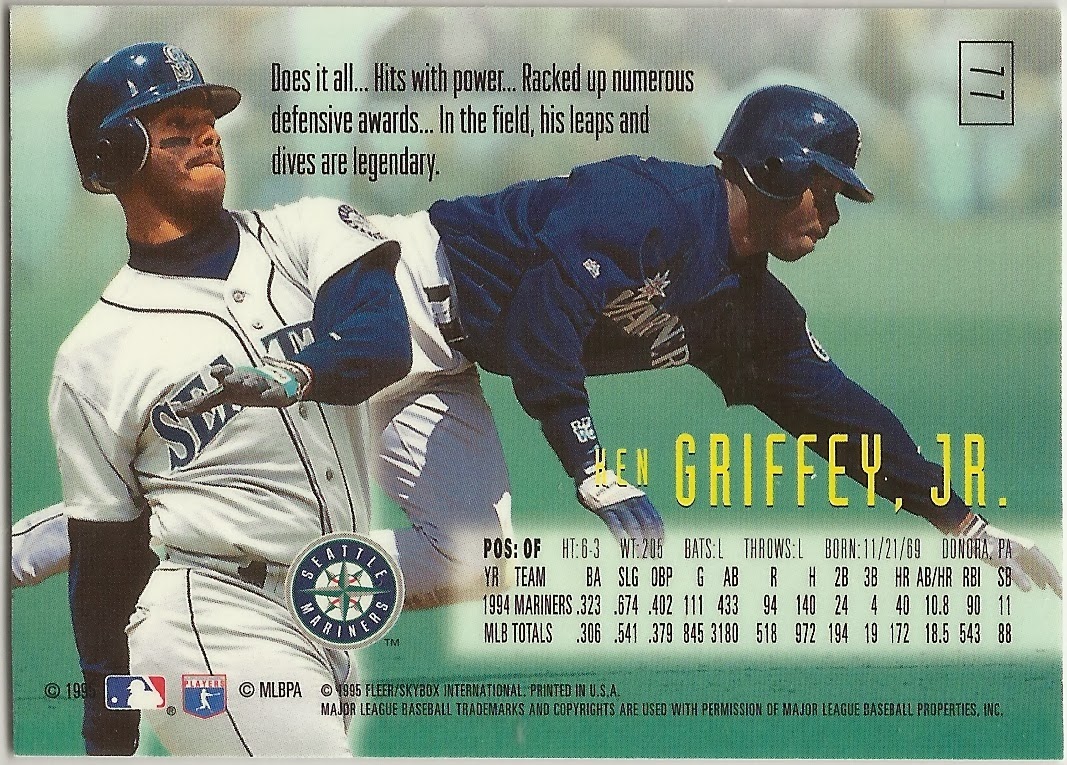 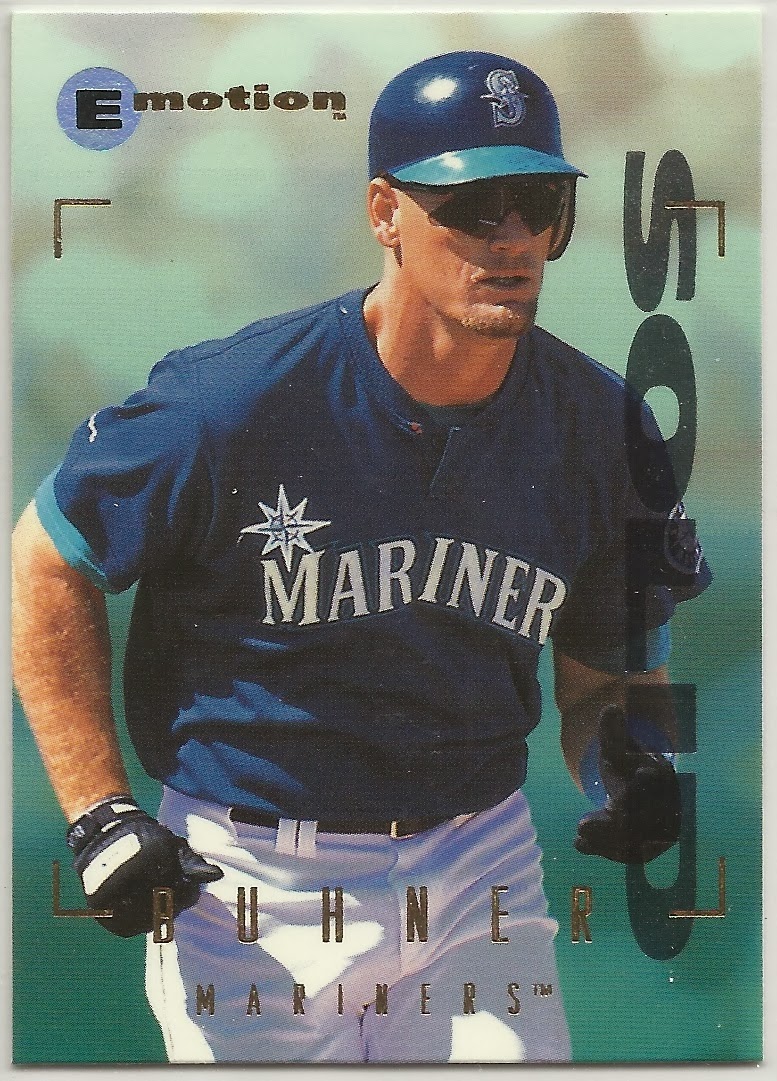 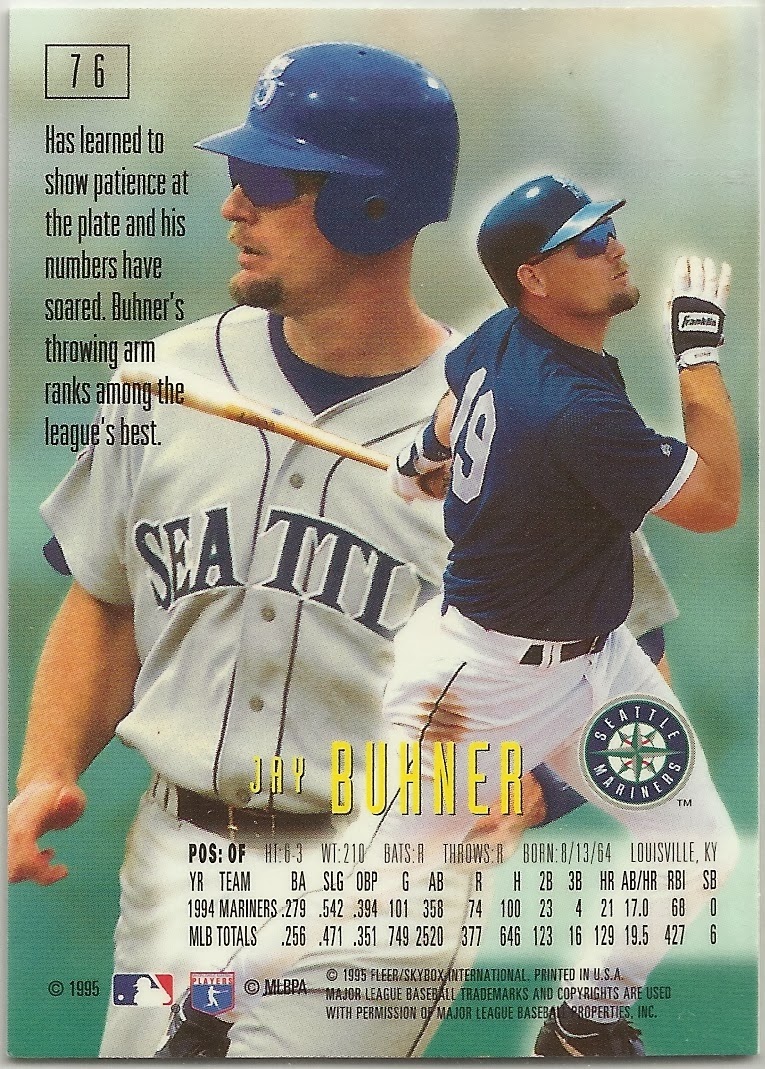 SOLID : adjective \ˈsä-ləd\
: firm or hard : not having the form of a gas or liquid

However, in this case, such is a male athlete in a locker room, a solid may be filled with both a gas and liquid each of which may be expelled at any time with lack of reservation.

I knew Buhner was on a 1988 Topps traded card in a Yankee uniform, then played 14 years for the Mariners, but didn't realize what transpired before that.
Check this out:

June 6, 1983: Drafted by the Atlanta Braves in the 9th round of the 1983 amateur draft, but did not sign.
January 17, 1984: Drafted by the Pittsburgh Pirates in the 2nd round of the 1984 amateur draft (January Secondary). Player signed May 26, 1984.
December 20, 1984: Traded by the Pittsburgh Pirates with Dale Berra and Alfonso Pulido to the New York Yankees for Tim Foli, Steve Kemp and cash.
July 21, 1988: Traded by the New York Yankees with a player to be named later and Rich Balabon (minors) to the Seattle Mariners for Ken Phelps. The New York Yankees sent Troy Evers (minors) (October 12, 1988) to the Seattle Mariners to complete the trade.

And we all know what he did for the Mariners in those 14 seasons and how much he means to them.